Who are the Jewish Republican voters going to cast their votes for come Monday?  I went to 2012 Presidential Candidates.org to find out more.   I found extensive evidence to suggest that both Newt and Mitt are pro-Israel.

Too bad for them, Jewish Americans are not single-issue voters.  Most Jews care about  the same things most Americans care about…jobs, the economy, and civil rights, to name a few.

Make no mistake about it: if your Florida Grandma’s a Jew, she’s probably a Democrat.  If she isn’t, she has a tough decision to make.  Outlandish Newt or Pretty Boy Mitt?  What’s better, a bully or a guy who keeps insisting it’s his turn to speak?

In honor of my Jewish American friends and the tough choices they have in Florida this week, today’s recipe is Classic Matzo Ball Soup…a comforting choice in a world filled with uncertainty.

A couple things about this recipe: I learned the trick about matzo balls from my friend Carol Smoler.  When I was learning how to make this soup many years ago, she advised me to buy the “matzo ball and soup mix” as opposed to “matzo ball mix”.  The matzo balls are less dense, more like what you get when you get a good bowl of matzo ball or mish mosh soup in a deli.  My method for chicken soup is from Edna Lewis, a great African American Southern cook.  God bless America!

Four years ago, Obama received 78 percent of the Jewish vote.  It would be a mistake for the Republican candidates to focus only on Israel.

Strain soup.  Return strained broth to soup pot.  Remove skin and bones from chicken and tear chicken into bite-size pieces.  Add chicken to broth with carrots and celery.  Add 1 tsp. salt and ½ tsp. pepper; stir and taste, add more salt and pepper if that’s your preference.  Bring to a simmer.

Author’s note:
This soup is a little labor intensive, but it’s worth it.  OY! 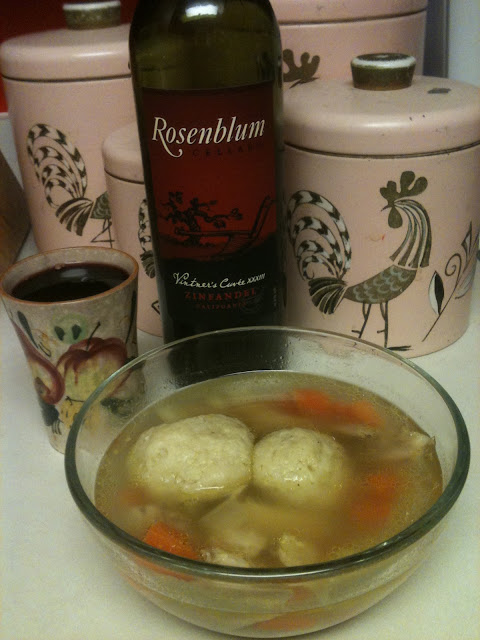