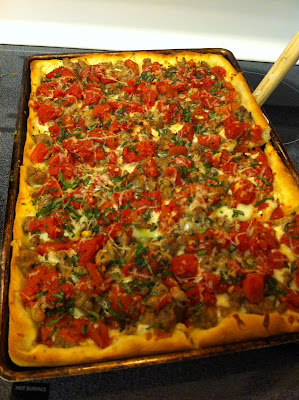 Rhambo closed 50 schools this week.  Nobody failed to notice that they were all in poor neighborhoods.  Yes, we need to acknowledge that the state of Illinois and the city of Chicago are having budget problems...but why do budget problems always get solved on the backs of poor people?  Did the citizens cause these problems?  No, it was the greedy politicians.  Citizens do not create the budgets and therefore do not fail to pay the bills.  As a citizen of Illinois, I pay very high taxes.  In fact, our gas gets taxed by the city, the state AND the county...where does that money go?  0.70 cents a gallon in taxes alone for gasoline!

It's the way that the elected officials - OF BOTH PARTIES - throw up their hands in frustration, do nothing and then make decisions that hurt the hard working citizens of Chicago and Illinois.  And...LET'S NOT PRETEND that poor people are all on welfare!  Most poor people have 2 and sometimes 3 jobs.

So now, kids who live in gang infested neighborhoods will have to go further to school.  Explain your f'n budget problems to the mother of a bright young kid who gets shot.

Chicago isn't terrible.  We are the only city in the world that likes Italian sausage on our pizza, and this New-York inspired "grandma" pizza has a LOT of Italian sausage.  When I throw my hands up, it's only the dough that flies! 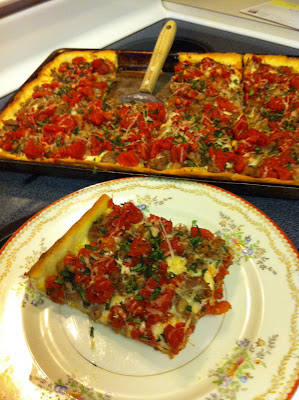 Combine bread flour, 1 tsp. salt and yeast in work bowl of food processor fitted with metal blade.  Pulse to combine.  In glass measuring cup combine water, 1 Tbsp. oil and honey.  With processor running, pour water mixture through feed tube.  Run processor 1 minute (after about 15 seconds the dough will come together in a ball and whip around the work bowl). Remove dough from bowl and knead on counter or other hard work surface.  Stretch into a 6x8-inch rectangle.

Pour remaining oil in 15x10-inch jelly roll pan.  Place dough in pan and turn over to coat both sides with oil.  Cover with plastic wrap and let rise 1 hour or until double.

While dough is rising, cook Italian sausage on medium heat in large skillet until cooked through, about 8 minutes (avoid browning sausage).

Top dough with cheese blend, then with sausage.  Top with combined tomatoes, remaining salt and oil, garlic and half of the pepper. Sprinkle with Parmesan cheese, oregano and remaining pepper. Bake 15 minutes or until edges are golden brown and cheese is melted.  Sprinkle with basil.  Cut with pizza cutter or scissors.
Posted by Kitchen Caucus Queen at 8:29 PM