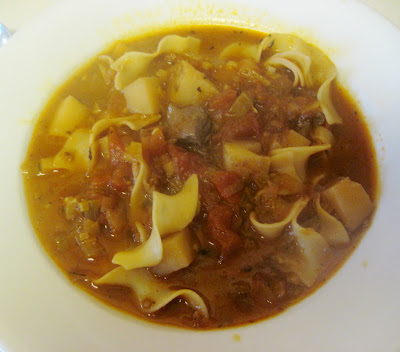 Cook bacon in soup pot or Dutch oven 5 minutes or until most of fat is rendered and bacon is crisp.  Remove bacon with slotted spoon.  Add onion, leek and beef.  Cook and stir 5 minutes or until vegetables are tender and beef is browned, adding flour and garlic during last minute.

Add remaining ingredients except noodles; bring to a boil.  Reduce heat and simmer, partially covered, 1 hour or until meat and vegetables are tender.