Washington-— The United Auto Workers will fly a banner over the Daytona 500 NASCAR race on Sunday, reminding voters of former Massachusetts Gov. Mitt Romney's opposition to the auto bailout.


The Detroit-based union will pay to fly a plane and banner from 10:30-11:30 a.m. that will read "Mitt Romney: Let Detroit Go Bankrupt" — a reference to a headline on a November 2008 New York Times op-ed that Romney wrote opposing a U.S. bailout of General Motors and Chrysler. The union also protested Romney's appearance on Friday at Ford Field in Detroit.
http://www.detroitnews.com/article/20120225/POLITICS01/202250397/1361/UAW-to-protest-Romney-at-Daytona-500

There is no negotiating on this one; you have to shake it up to form the right union. 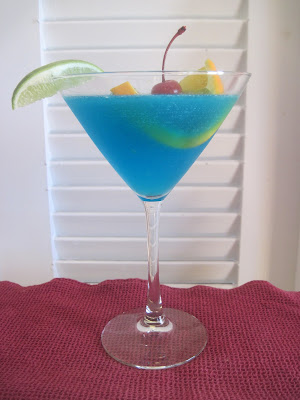 Add all ingredients to a 2 qt. pitcher.

Tip:
Classic Cosmo: use standard red cranberry juice instead of white cranberry juice, and triple sec in place of the blue curaçao.
Posted by Kitchen Caucus Queen at 2:00 AM