Plan to serve something healthy for dinner...just don't send out a press release. 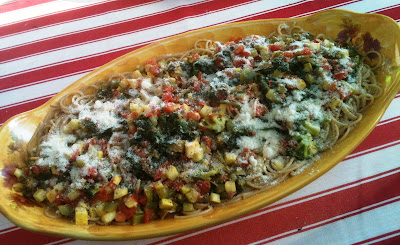 Stir in squash, broccoli and pepper.  Cook and stir 3 to 4 minutes or until crisp-tender.  Stir in tomatoes, wine, salt and pepper; cover and cook 3 minutes.  Add spinach; stir gently until spinach is just wilted.  Stir in 1/4 cup cheese.

Note:
Timing is perfect if you add pasta to water right after you add tomatoes, etc., and cover skillet.