Well, THAT was a waste of taxpayer money, indicting a person who may have cheated a rich, old lady.  The weak criminal case resulted in a mistrial.  That being said, the public jury is unanimous in regard to the type of person that carries on in this way while his wife is dying of cancer. 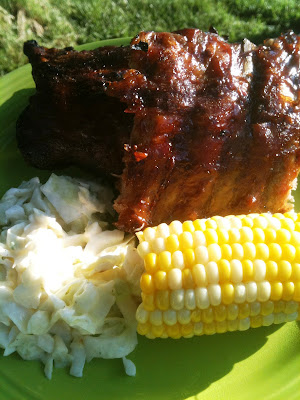 It isn't difficult to make baby back ribs at home or to conduct oneself honorably.

Heat oven to 300ºF.  Place ribs in a single layer on foil-lined pans.

Bake 2 –3 hours (in 2 hours they will be a bit chewy, the way that I like them; after 3 hours they will be fall-off-the-bone tender.  Adjust timing according to your preference for tenderness).  Meanwhile, preheat grill to medium heat.

NOTES:
To remove the skin from the underside surface of the ribs:
Using a butter knife, slide it between the bone and the layer of skin that exists on the bottom side of the slab. Use the knife to pull up the skin, then grab it with your hand and peel it off down the entire length of the slab.  Use a paper towel to grasp the skin since it’s slippery.

Everybody has a favorite barbecue sauce.  My favorite is Show Me Barbecue Sauce, made in Harry Berrier’s basement since September, 1975. I’m not sure how old Harry is (I think he was 89 in 2007) but I believe he still oversees everything about his sweet, smoky, tomato-based sauce, long a staple of local grocery near Columbia, Missouri. The retired clinical pathologist at the University of Missouri-Columbia veterinary school succumbed to the pressure of producing his own sauce after years of requests for its recipe.

He still produces it in his basement, with full approval of the state of Missouri, to the tune of about 1,400 gallons a year.  Berrier’s never been much for contests, so he’s never entered his popular sauce in one.  He just knows people like it.

If you would like to try Show Me Barbecue Sauce, call Harry Berrier at 573-442-5309 (don't be surprised if they answer "Hello?").  I usually buy a case and he ships it C.O.D.  The shelf life is 5 years and it doesn’t require refrigeration until it is opened.

I also really like BULL’S EYE Original Barbecue Sauce, which is available everywhere.

If you prefer a spicy sauce, blend it with a chipotle chili in adobo sauce, or add some cayenne pepper to the sauce.  Orange zest is a tasty addition, too.