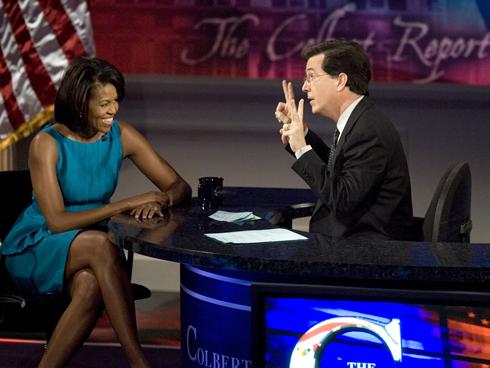 It's the first anniversary of first lady Michelle Obama's military families initiative, and she is engaged in a two-day public tour that includes an appearance with one of the nation's leading political satirists.
Mrs. Obama will be interviewed by Stephen Colbert on his Comedy Central show tonight.
Employing its droll sense of humor, The Colbert Reportannounced that "the last time she appeared was in April of 2008, when she was still just a poor, lowly U.S. Senator's wife."

SUPPORT OUR TROOPS Spring Vegetable Soup
This soup is chock full of fresh spring vegetables that will support your good health. 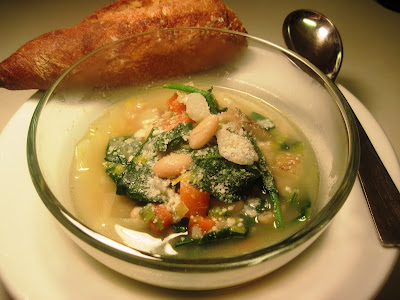 Heat oil in large soup pot.  Add potato, cabbage, leek and carrots.  Cook and stir 7 to 8 minutes or until cabbage is wilted.

Stir in broth; bring to a boil.  Reduce heat to low; add macaroni.  Cook 10 minutes or until macaroni is tender.

Stir in beans, spinach and black pepper.  Cook 3 minutes or until heated through and spinach is wilted.  Serve with Parmesan cheese as a topping.

Tip:
Add a 3-inch sprig of fresh rosemary to the soup pot while the pasta is cooking.  Remove before serving.

Happy Birthday to Marilyn Eisinger Brandt, my beautiful mom, who is 76 years old today.
Posted by Kitchen Caucus Queen at 2:00 AM