A most insightful article.  It really spoke to me as a Catholic-American.  I am not a one-issue voter; there are moral issues that don't include abortion.  It isn't wrong to care about those who already inhabit the earth. 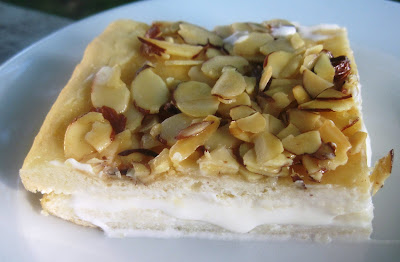 Pastry Cream:
Heat half and half and sugar on medium-low until almost boiling and sugar is dissolved, stirring occasionally.  Whisk the egg and egg yolk with flour and salt until smooth.  Whisk 1/4 cup of the heated half and half mixture into the eggs, then gradually whisk both together.  Stir over medium-low heat until the mixture thickens (do not boil) enough to coat a spoon.
Remove from heat, stir in vanilla and pour into bowl set over ice cubes.  Stir 1 minute to cool.  Cover with plastic wrap that is placed directly on surface of custard.  Refrigerate.
Dough
Mix yeast, flour and salt in bowl of food processor fitted with steel blade.
In microwave safe bowl, heat honey and butter on HIGH 30 seconds or until melted; stir. Whisk in milk, then egg.
Pour milk mixture through feed tube and process 1 minute. Dough will turn into a shaggy ball that spins around the side of the bowl.  Knead dough on counter 2 or 3 times, then place ball of dough in a greased bowl.  Cover with a towel and let rise 1 hour or until doubled.
Almond Topping
Combine sugar, honey and butter in small saucepan.  Cook and stir until mixture comes to a boil.  Reduce heat to low and simmer 5 to 6 minutes.  Stir in vanilla and almonds, stirring quickly to coat.  Remove from heat and let cool at room temperature.
Bake and Assemble
Preheat oven to 350°F.
Line 9x13-inch baking pan with foil and brush with butter.  On lightly floured surface roll dough into 9x13-inch rectangle.  Place dough in prepared pan. Spread honey-nut mixture evenly over top of dough.
Bake 25-30 minutes; cool completely.
Whip the whipping cream until stiff peaks form.  Stir about one-third of the whipped cream into the cold pastry cream, then fold in remaining whipped cream.
Remove cake from pan using foil handles.  Using a serrated bread knife, carefully slice the cake horizontally all the way through, creating 2 layers. Remove the top half and set aside.
Spread all of the pastry cream on bottom layer, then cover with top layer. Serve immediately, or store in refrigerator until ready to serve.