Republican candidates are in Illinois in advance of the GOP primary tomorrow.  If Santorum can win a big northern state, he might have a chance.  The source of the division in the party seems to be primarily religion and money.  Santorum's support comes from folks who describe themselves as very conservative, evangelical Christians, and make less than $100K per year, while Romney's supporters are moderately conservative, not necessarily religious and tend to make more than $100K a year.
http://www.washingtonpost.com/politics/santorum-romney-battle-reveals-stark-divide-in-the-gop/2012/03/17/gIQA7S79IS_story.html

Party?  That means pasta!  No difference of opinions here! 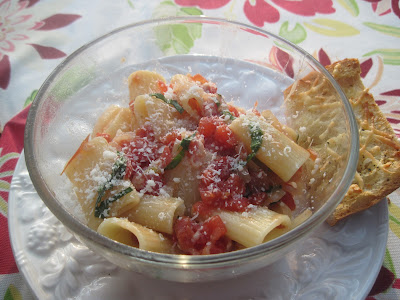 Cook pasta as directed on package.


While pasta is cooking, prepare sauce:  cook bacon in large skillet on medium-high heat; remove bacon with slotted spoon and drain on paper towels. Discard all but 2 Tbsp. drippings. Add olive oil and onion; cook, stirring, 5 minutes or until tender.  Add garlic and red pepper; cook and stir 1 minute or until garlic is fragrant. 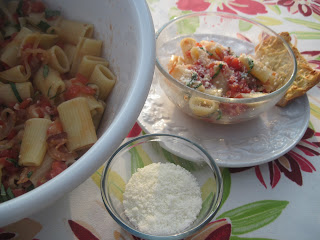 Drain pasta and toss with sauce and cheese.  Serve immediately.

Tip:
Substitute 4 oz. bulk Italian sausage, crumbled, or pancetta, diced, for bacon (use 2 Tbsp. olive oil if using Italian sausage; there will be less than 2 Tbsp. rendered fat).
Posted by Kitchen Caucus Queen at 2:00 AM