Rick Santorum trounced Mitt Romney in Louisiana, and with all due respect, I made beignet in his honor.  In April, 300+ delegates are at stake, mostly in the northeast (exception being Wisconsin), where there are fewer voters who describe themselves as very conservative or evangelical...and more who make more than $200K a year.  And so it goes... 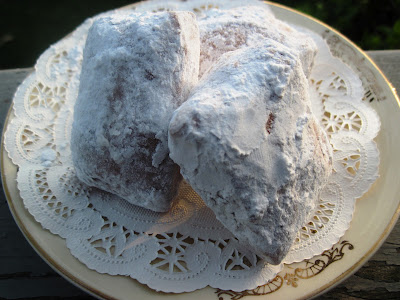 Mix water, sugar and shortening until shortening is melted.  Stir in yeast; proof 5 minutes.  Whisk in egg and evaporated milk.
Add flour and salt to bowl of food processor; pulse to combine.  Pour in yeast mixture and run 1 minute (dough will form a ball and spin around bowl).
Remove dough from food processor and knead on lightly floured surface until smooth, about 30 seconds. Spray a large bowl with nonstick spray. Add dough to prepared bowl and cover with towel. Let rise in a warm place for 1-1/2 hours.
Heat oil in a deep-fryer or saucepot (350-360°F).
Pour 1 cup confectioners' sugar in paper bag; set aside.
Divide dough in half.  Roll each dough half out to an 8-inch square, 1/4-inch thick, and cut into 25 squares. Deep-fry, turning constantly, until golden brown. Remove from oil using slotted spoon to paper towel-lined tray.  Place beignet in paper bag with sugar and shake bag to coat.  Repeat with remaining dough and confectioners sugar.
Tip:
Serve with strong coffee.
Posted by Kitchen Caucus Queen at 2:00 AM