Catholic-Americans are NOT one issue voters, though if you were to believe what's printed in the media you would think that we are all obsessed only with outlawing abortion. Central to the Catholic faith is a belief in peaceful coexistence, social welfare and community.  So, while conservative candidates might appeal to those Catholics who are utterly opposed to abortion, liberal candidates appeal to Catholics who believe that supporting one another and living peacefully is most important.

Everyone will agree that this is a great meal. 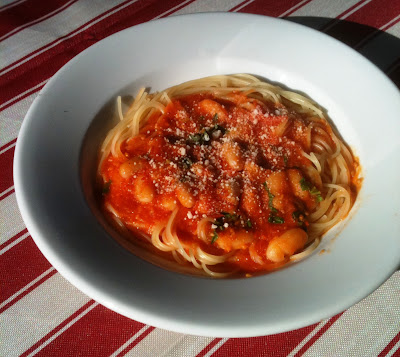 Place tomatoes in single layer on baking sheet and drizzle with 2 Tbsp. olive oil.  Sprinkle with salt and pepper.  Roast tomatoes 20 to 25 minutes or until soft.

Heat remaining oil in medium sauce pot on medium heat.  Add garlic; cook and stir until fragrant, about 1 minute.  Add tomatoes and their liquid.  Puree using immersion blender. Bring to boil, then cook 20 minutes on medium, stirring occasionally, until slightly thickened.  Stir in beans and cook 2 minutes or until heated through.

Tip:
An Italian red wine, like Il Poggio Sangiovese Rubicone, is a nice accompaniment to this dish.