If you read the above article, I hope that you note the following passage:


In the past, Mr. Romney has offered his donors a more detailed view of his policy plans and political challenges than he’s willing to unveil in public.

Why would a candidate seeking the highest office in the free world choose to bar the press from such an event?  Is it possible that only million dollar donors are fit to receive such details?  If a candidate is unveiling policy plans, I think that we all need to know what they are, so that we can make informed choices when we go to the polls in November.  If he's afraid that the American people won't go for his plans, then what is he going to do if he's elected?  Run roughshod over all of us?  Or is this just fear?  In London, Romney showed his true, arrogant colors, by insulting the Olympic planners, implying that he was a better organizer in Salt Lake City in 2002.  Another Etch-A-Sketch moment.

Is he afraid that he'll stick his foot in his mouth again, or is he just afraid to talk about his unpopular plans?

Fear is not a good quality in a presidential candidate.  He wouldn't have had the balls to take Osama Bin Laden out.  The bar has been raised.

What we need are some debates.  We need to know who this carefully guarded candidate really is.

Don't be afraid to get out the deep fryer; these wings are BIG on flavor and very popular. 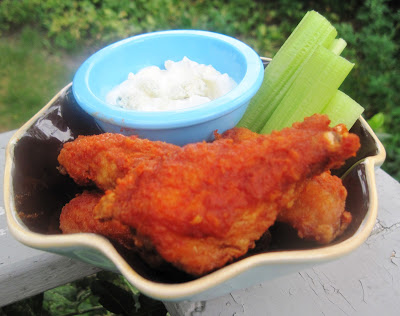 In large pot or deep-fryer, heat oil to 375°F. In 4 batches of 6, dredge wings in flour and fry immediately in hot oil, 6 to 7 minutes, moving and turning pieces frequently with tongs, until deep golden brown. Drain on paper towels.